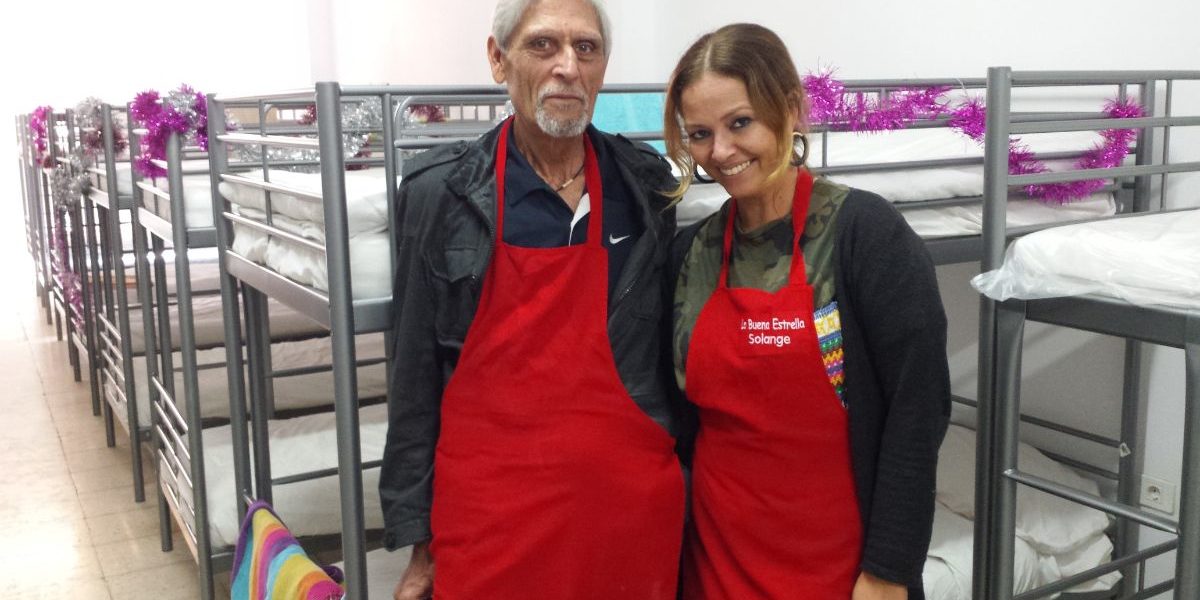 The stories of solidarity and camaraderie occur every day in La Buena Estrella, in El Fraile, the only social dining room and overnight emergency center in the South that represents a model in helping the most disadvantaged

At one o'clock in the afternoon there is not a free space in the social dining room La Buena Estrella de El Fraile. 40 people of different nationalities, including two children who should not be more than 3 years and a baby in his pushchair with his mother, sit at the table to eat the food that Alexis and Charly serve, and that includes chicken soup, fish with potatoes, pork ribs, roast chicken, fruit and yoghurts. Minutes before lunch, a score of students from IES Ichasagua schoo,l in Los Cristianos, accompanied by a couple of teachers, delivered, for the third year in a row, several boxes of food and personal hygiene and cleaning products, to the manager of the premises. The generous action of students and teachers was reciprocated with an ovation from the entire room.

After the dessert the place empties. While some users sit on the couch to watch TV for a while next to a Christmas tree that shines in a special way, others mop the floor, clean tables and wash trays, plates and glasses so that everything is in perfect clean condition for dinner.

Witness to everything, Marlene Nin, Director of Operations of Adrián Hoteles, a foundation created in May 2017, which has just saved the continuity of the dining room, harassed by the bureaucracy of the administration and the consequent delays in the processing of aid. The aforesaid foundation has cleared the way of the rental of the premises for this year, by paying 8.000 euros rent. One less problem for Solange Díaz de las Casas, director of the dining room La Buena Estrella and its emergency overnight center, the first facilities of its kind in the South of Tenerife

Up to 22 people, all male, sleep daily in these rooms, "although we always leave a bed unused for some case of extreme need," clarifies Solange, who never tires of repeating that "they are people who have had bad luck in the lifetime". Here, in addition to bunk beds, decorated on these dates with Christmas motifs, they are given breakfast, lunch and dinner. Andrés Villa, an ex-user of 65 years, now hired as a worker, is responsible for everything to work like a clock: "People are very calm, no one steals, no aggressive people, no alcohol is allowed, the shower is compulsory every night before getting into bed and those who want to smoke before, know that they have to go out one by one so as not to disturb the neighbours. Those are the main rules that have to be met. "

He himself is responsible for going every afternoon to the Siam Park water park to collect the surplus food to distribute as hot dinners at nightfall. "We eat the same luxury buffet as tourists: chops, chicken ...", he says with a smile that fails to erase the claws of life marked on his face. While everyone is sleeping, he stands guard during the early hours reclining on one of the sofas in the entrance, a place where you can watch television until midnight. Sometimes, we have had to call an ambulance because of the indisposition of some user, most of them foreigners, but never because of a brawl "There are Moroccans, English, Germans, Russians, Poles and Juanito", says the head of the sleeping area, with a kind gesture and noble look, to whom life has not been very kind. He was evicted in Arona when he could not pay the rent and was seen on the street overnight. "I had nowhere to go and they referred me here, where I discovered Solange, who is like an angel to everyone. Here I have met my new family. "

Outside, Yaiza and Domingo merge in a hug. She, a taxi driver and social worker on leave, does not stop crying, and he does not get tired of thanking her. Domingo has just entered the dining room and today will spend his first night in a bed. He will not have to sleep rough any more with cardboards on a bench next to the bus station of Los Cristianos, where Yaiza discovered him one day, at the wheel of her taxi, three years ago when her kind heart opened wide.

Domingo, of 44 years and with the face of good people, stayed in the street after having a party with friends and alcohol that ended in a fuss and that brought as a consequence the lock change the next day by the owner of the house . From that date, he contemplates the stars every night among cartons and wine cartons before he sleeps. Once a week he lends a hand in a warehouse in Las Verónicas where in exchange they give him 20 euros.

Yaiza has bought him clothes and she is in charge of washing them all. "Do not give me anything new because they're going to steal it," he says every time he receives a new garment, chastened by bitter experiences suffered during so many nights out in the open. Not only have they taken away the little he had, but some unscrupulous man has even put cigarettes out on his hand while he slept. But there, was his guardian angel, to take him in her taxi to a health center and do the cures in the following days. "This year I said to myself: if Domingo does not have a roof for Christmas, I'll take him home," Yaiza told this newspaper while tears rolled down her cheeks.

Luckily, that bed was just found in El Fraile and the emotion can be seen on both: melted at the entrance of the dining room in an endless embrace, which was witnessed by our newspaper Diario De Avisos, she whispers in his ear between sobs: "It´s all over, Domingo, everything will be ok ". And he returns the look of a child to whom Father Christmas had just left him the gift that he had dreamed off.

Domingo's expression was almost the same as on 24, when the nine children who attend the center, saw Father Christmas, loaded with gifts with their names, come by as a surprise after a special lunch. His arrival thrilled young and old people alike, especially the youngest, who did not dare to blink, in a scene that reminded the enthusiastic look of little Giosué, in "Life is beautiful", the unforgettable film by Roberto Benigni. And, above all, La Buena Estrella is a factory of solidarity and fellowship, where the altruistic samples follow each other. A couple of Sundays ago, without going any further, hairdressers of the NGO called "Tijeras Solidarias" came to the center to cut the hair for free to thirty users.

In spite of everything, the director Solange has no time to contemplate her achievement that began, with her friend Laura Infante (today in an other social project) on 18 of November of 2014.

The daily life of Solange Díaz is marked by the headache of lookig for money under the stones, to keep a ship afloat on which more and more passengers are getting on. That is why when we ask her what she would like for the new year, she does not hesitate to answer: "To obtain economic stability to continue feeding and offer a roof to those who have nothing". Her message is addressed to companies, hotels, individuals and institutions that want to hear it.

The Government of the Canary Islands contributes 40.000 euros per year; the Cabildo, whose subsidy fluctuates according to the associations that opt ​​for aid, has not yet processed its economic aid this year, and the City Council of Arona, which has also been delayed, destines 20.000 euros. The last public administration to lend a hand has been the City of Granadilla, which will soon sign an agreement for which 5.000 euros will be allocated to the dining room. Because until now people arrive not only from the southern region but also from the entire island. Lately, the number of users, who have just received medical discharge at La Candelaria Hospital, has increased as they have nowhere to go. The majority, in addition, arrives without the corresponding medication. Solange also has words of thanks for the catering service Eurest and for businessmen like José Fernando Cabrera, president of FAST, who makes food contributions periodically, the last one, 200 liters of milk makes 10 days.

At the entrance of the room, a phrase written in handwriting by a user on a small blackboard with several acknowledgments, is striking: "The happiness of your life depends on the quality of your thoughts". That is the path that seems to open up before those for whom the only stroke of luck they have known in many years is, to discover a family that awaited them in a social dining room in El Fraile, where they arrived guided by a premonitory name: The Good Star "La Buena Estrella".

In recent months, the presence in the social diner of young Moroccans, who have come to the Islands by boat and who have just left the Detention Center of "Hoya FrÍa" has increased. Boys like Mahdi, of 24 years, who, after reaching the Canary coast six months ago, sleep since August on the beach of Las Burras, a few 500 meters from the place where he finds his daily hot food ration. "In Morocco, life is very bad, there is no work for young people," said this former fish cleaner who now dreams of a new life in Europe.